Researchers at the California Institute of Technology (Caltech) have developed a new artificial skin that allows robots to sense temperature and pressure, as well as recognize toxic chemicals through touch.

According to the scientists, the machine learning system enables the interaction between artificial skin and human skin, allowing flesh-and-blood users to control the robot while receiving tactile feedback in their own hands through sensors. 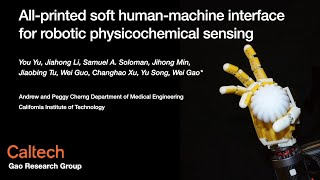 “Modern robots play an increasingly important role in security, agriculture and manufacturing. Can we give these robots a sense of touch and temperature? Can we also give them a sense of chemicals like explosives or infectious bacteria and viruses Waiting for a biohazard? We’re working on it,” explained the study’s lead author, Wei Gao, a professor of engineering.

The system that mimics human skin consists of a gel-like hydrogel that makes robotic fingers softer. The sensors embedded in this hydrogel are produced in an inkjet printer, enabling the artificial skin to detect what’s going on around it.

The researchers used silver nanoparticles to print micron-scale sensor layers, allowing them to be designed to detect a variety of objects, from the hardest objects to softer surfaces, with changing temperature and chemical composition.

“When we want to detect a certain compound, we make sure the sensor has a high electrochemical response to it. The platinum-impregnated graphene detects TNT explosive very quickly and selectively. Carbon nanotubes are great for detecting the presence of viruses,” Gao added.

Scientists at the Swiss Federal Institute of Technology Zurich (ETHZ) are also working on developing an artificial skin that could give robotic devices a human-like touch. Devices made of flexible materials can simulate the touch of a fingertip. 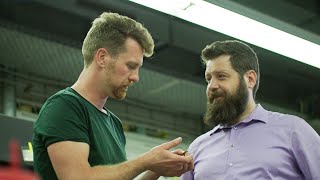 Even Meta/Facebook, in partnership with Carnegie Mellon University, is participating in a study aimed at creating an electronic skin that uses machine learning and artificial intelligence (AI) to improve the way machines “feel” and interact with objects beside them.

Researchers at the Chinese University of Hong Kong have created an ionic robotic skin called I-skin that reproduces the ability of human skin to bruise when it suffers a certain kind of injury. The material changes color depending on the impact it receives.

The novelty of the device developed at Caltech lies precisely in the interactive system, which allows a human user to control the robot through their own muscle movements and receive haptic feedback from the artificial skin in the robot’s hand.

Electrodes attached to a human operator’s forearm are positioned to detect electrical signals produced by the user’s muscles. A simple flick of the wrist causes the arm to move up or down. Another sensor is responsible for providing tactile sensation in the form of electrical stimulation.

“Our system can be applied to almost everything from agriculture to safety and environmental protection, allowing robot operators to ‘feel’ how much pesticide has been applied to crops, whether suspicious backpacks at airports have traces of explosives, or where they are located in rivers pollution sources in China,” Professor Gao Wei predicted.